Clio’s fourth briefing on the impact of COVID-19 shows steady recovery of firm caseloads throughout the summer months despite the large surge of virus cases across the US. Billing volumes dropped somewhat in August when compared to the previous year.

At the time of writing, global cases of COVID-19 have surpassed 29 million globally and 6 million in the US. The number of new coronavirus cases has surged since Clio’s last briefing from July 15, 2020. Specifically, the beginning of September saw a single-day peak of over 300,000 new coronavirus cases worldwide. Within the US, the number of new reported cases surged significantly through the summer and has since been gradually declining. Despite the steady number of new virus cases, there are signs that the legal industry is continually adapting and showing resilience to the challenges posed by COVID-19.

As part of the ongoing industry analysis featured in the Legal Trends Report, this is the fourth briefing in a series of in-depth research initiatives undertaken by Clio to learn more about the challenges US legal professionals currently face due to the global pandemic, and how the industry can best adapt.

Included below is an update on key business metrics for law firms, which have also been published at Clio’s COVID-19 research hub, which provides further details on individual states and practice areas. Additionally, recent survey results have shown overwhelming evidence that technology has been essential to managing industry challenges posed by COVID-19.

Surveys of US legal professionals

Surveys of US consumers (general population)

Since the beginning of the pandemic, the total number of new legal matters has trended upward. It’s now positioned just below the baseline and has been relatively consistent over the past few weeks, thanks in part to stronger performances by certain practice areas, which will be discussed in more detail later in this report. Year-over-year billing volumes for August fell to -11% compared to baseline. However, with August’s steady increase in new casework,  billing volumes may increase over the next month as client work gets completed.

Recovery continues steadily across most states

The number of caseloads in New York returned to baseline levels in August. As the number of new daily COVID-19 cases declines, the percent change in new matters has increased correspondingly. New York has been successful so far in keeping coronavirus numbers low relative to other states, enabling lawyer caseloads to return to healthy conditions. California experienced a sharp decline in new casework, falling from 0% to -9% compared to baseline over the past few weeks. Unlike New York’s consistently downward trend of new COVID-19 cases, California has experienced drastic fluctuations in the number of new daily cases, although it is seemingly on a downward trend. 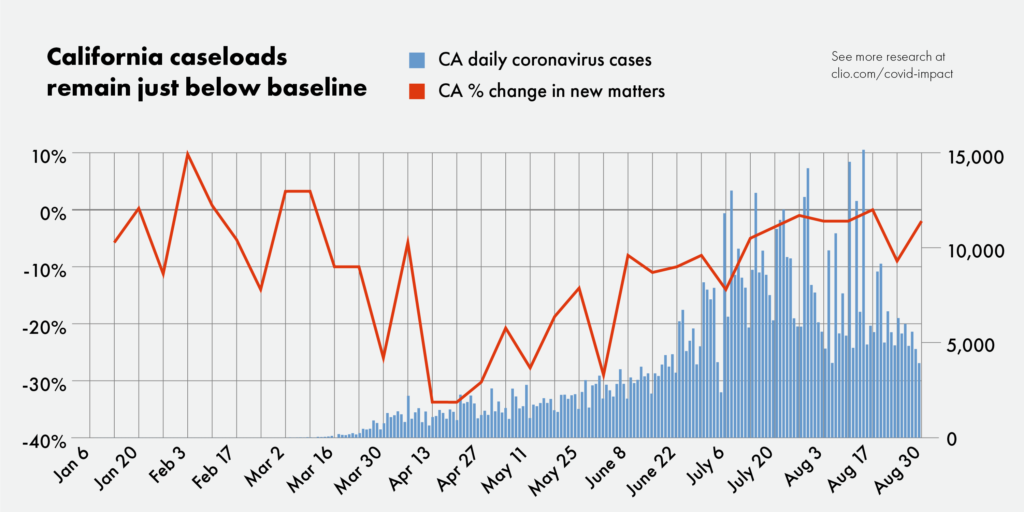 The month of August has been positive for Florida law firms in terms of new casework. Over the past few weeks, Florida has surpassed baseline volume to +8% and the number of new daily COVID-19 cases has been consistently declining. The percentage change in new matters for Texas stayed consistently below baseline through most of the summer. If the state can keep the number of new COVID-19 cases down on a consistent basis, it should continue to see new caseloads recover steadily, similar to states like Florida. Signs of recovery seen across most practice areas

Against the baseline, the overall trend since the onset of the coronavirus has been positive for many practice areas. According to Clio’s analysis of new matter creation, a steady increase in caseloads has been seen in real estate, intellectual property, and wills and estates.

Wills and estates saw a large decrease in new matter creation between March and April, dropping as low as -25% below baseline. However, it is now trending above baseline after experiencing an uptick in mid-July. Family and traffic offenses continue to recover. Over the past few weeks, family-related caseloads have stabilized and now sit close to baseline. Traffic offenses took a significant dive in April falling to -71% compared to baseline. Fortunately, it has made a strong recovery and steadily increased month-over-month, now sitting near -10% below baseline.

Bankruptcy took a dip in April to -46% below baseline and has remained relatively flat month-over-month. Employment & labor has recovered, albeit to a lesser extent than other practice areas, and peaked over the last few weeks at +16% above baseline. However, a major uptick is still to be seen, even with unemployment rates as high as they are. 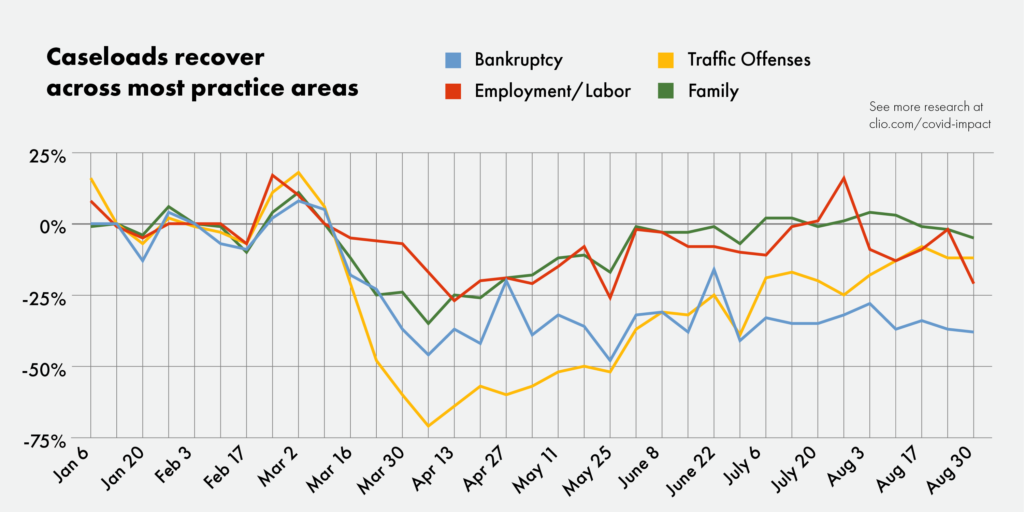 Overall, legal professionals are still highly concerned about the sustained health of their law firms. The percentage of practitioners who are worried about their success is currently at 53%, compared to a high of 67% at the beginning of the pandemic. But despite visible recovery for certain practice areas, the industry as a whole is still suffering and in a depleted state.

Although many legal professionals are still concerned about the economic future of their law firms, a lesser percentage are worried about their livelihood. At the beginning of the pandemic, 57% reported being worried about being able to make a living, while only 36% reported identifying with this sentiment over the last few weeks. Legal professionals’ confidence in the economy was in decline between April and May. June had a substantially positive outlook and saw a jump from 16% to 26%. However, with current economic conditions, expectations are once again in decline and dropped to 19% in July.

There is also a significantly pessimistic outlook in regards to the social impact recovering in the near future. Since April, the trending outlook has been in decline and experienced the lowest survey results to date with only 8% of legal professionals expecting the impacts on social impact to subside within three months. At the same time, only 18% of respondents support easing social restrictions related to COVID-19. A reason for 53% of respondents being worried about the success of their law firm may be associated with the number of human resources that remain. Layoffs are still relatively high compared to the beginning of the pandemic. Although not as high as May and June, data from July shows that 20% of law firms have either already laid off staff, or expect to lay off staff.

On the positive side, almost an equal percentage of respondents (18%) indicated that their law firm hired new or furloughed staff in the past month. Financial concerns remain high among consumers and may be a reason for not engaging with lawyers to address a legal issue. Many consumers continue to worry about being able to support themselves financially (46%). This is evident when looking at the trend increase in the number of consumers who report they cannot afford to deal with a legal problem, which has reached a high of 61%. However, whether or not consumers are in need of a lawyer, it’s alarming that an increasing number of consumers believe that lawyers are no longer providing legal services during the pandemic. The percentage of consumers who believed this in April was 22% but the figure has now risen to 35% as of July, which may be having a significant impact on consumer decisions to put off their legal problems.