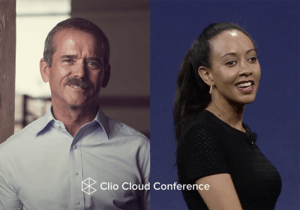 With a bevy of “firsts” behind him, Colonel Chris Hadfield has earned the moniker, “the most famous astronaut since Neil Armstrong.” In his 21 years as an astronaut, engineer, and pilot, Colonel Hadfield has intercepted Soviet bombers in Canadian airspace, lived on the ocean floor, been NASA’s Director of Operations in Russia, and recorded science and music videos seen by hundreds of millions. Colonel Hadfield became a pop culture sensation when he live-tweeted living aboard the International Space Station and has written three books that encourage his followers to aim high and push boundaries.

Haben Girma, the first Deafblind person to graduate from Harvard Law School, is a unique attorney who seamlessly weaves innovation in both the tech and legal fields in her motivational speeches. Heavily lauded—including honors from Presidents Bill Clinton and Barack Obama—Girma’s experience in law, sociology, and tech inform her life’s dedication to advocating for equal access to information for people with disabilities.

“The Clio Cloud Conference is where the future of the legal profession is explored and defined,” said Jack Newton, co-founder and CEO of Clio. “It’s fitting that our keynote speakers are trailblazers who’ve forged highly successful paths with grit and ingenuity. Our attendees will no doubt see parallels to their own innovative careers.”

The Clio Cloud Conference brings together 1,000 of the best and brightest from the legal, business, and technology worlds for one of the industry’s top conferences–educating, growing, and actively solving points of contention for lawyers and their clients.