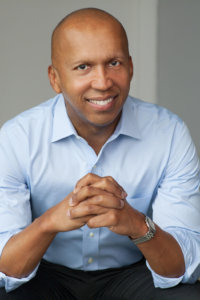 Bryan Stevenson, Founder and Executive Director of the Equal Justice Initiative, will present on issues in America’s criminal justice system at this year’s conference.

Vancouver, BC—(June 5, 2018) – Clio, the leader in cloud-based legal practice management, is excited to announce Bryan Stevenson as a keynote speaker at this year’s Clio Cloud Conference in New Orleans, Louisiana. Mr. Stevenson will be giving a keynote entitled, “American Injustice: Mercy, Humanity, and Making a Difference.” An inspiring and unflinchingly honest speaker, Bryan Stevenson will talk about defending some of America’s most rejected and marginalized people, and the issues present in today’s criminal justice system.

“At Clio, our mission is to transform the practice of law, for good, and Bryan Stevenson embodies the kind of transformation we are striving to accomplish,” said Jack Newton CEO and Co-founder of Clio. “Mr. Stevenson has dedicated his career to helping the poor, the incarcerated, and the condemned. His stories are deeply moving. I think we will all leave this year’s Clio Cloud Conference inspired with fresh ideas about how we can make a difference.” Mr. Stevenson is the founder and Executive Director of the Equal Justice Initiative (EJI) in Montgomery, Alabama. Under his leadership, EJI has won major legal challenges eliminating excessive and unfair sentencing, exonerating innocent death row prisoners, confronting abuse of the incarcerated and the mentally ill, and aiding children prosecuted as adults.

Mr. Stevenson has successfully argued several cases in the United States Supreme Court and recently won a historic ruling that mandatory life-without-parole sentences for all children 17 or younger are unconstitutional. Mr. Stevenson and his staff have won reversals, relief, or release for over 125 wrongly condemned prisoners on death row. Mr. Stevenson has initiated major new anti-poverty and anti-discrimination efforts that challenge the legacy of racial inequality in America.

Bryan Stevenson will be bringing his wealth of experience in transforming the criminal justice system, for the better, and knowledge of the difficulties faced by those incarcerated to this year’s Clio Cloud Conference from October 4-5, 2018. Conference attendees will leave with newfound inspiration and fresh ideas about how to better make a difference in the world from someone who has been instrumental in real world change in the legal sphere. Those interested in attending are encouraged to purchase their 2018 passes early as space is limited.

Founded in Vancouver, Canada in 2008, Clio is the most comprehensive cloud-based legal practice management platform. With the help of the cloud, Clio eases the processes of time tracking, billing, administration, and collaboration for law firms of all sizes. One of Canada’s fastest-growing companies with international reach, Clio employs over 250 individuals with a rapidly growing customer base spanning 90 countries. Clio was named one of CIX’s Top 20 Most Innovative Technology Companies, and for the last two years, has been recognized by Deloitte on both the Fast50 and the Fast500 lists. Learn more at clio.com.